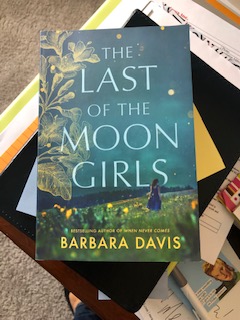 I read this book for my book club’s November meeting, but it was already sitting on my TBR list. There’d been a lot of buzz about it on my social media feeds and I couldn’t wait to dig in. Although, I haven’t read a book by Barbara Davis before, this will not be my last. Also, I’d missed the sweet magical tales written by Sarah Addison Allen and this book promised to give me my fix.

Lizzy Moon came from a long line of gifted women who owned a lavender farm in a small New England town. She escaped her family’s legacy by running away after college and never returning. Now, she has a successful career in New York City, but she must go back to confront her past when her grandmother dies and leaves the farm to her.

Each generation of Moon women, have married and had one child – a daughter. The daughter carries on the family tradition of healing. Lizzie’s determined that she won’t be the next one in line and plans to sell the farm and return to her job in the perfume industry after she cleans out a few mementos, like the books each woman has passed down.

However, once she returns to the farm, Lizzy finds it falling down in disrepair. She’d planned to sell it and end that chapter of her life, but the memories and problems of the past envelope her in an ever widening circle. As she begins to investigate the murder of two young girls who were found dead in the farm’s pond years before, strange things began to happen around the farm. Her grandmother, who raised her, was accused but never arrested of the girl’s deaths and Lizzy wants to clear her name.

Her former classmate, Andrew, lives nearby and tries to help her fix up the farm and solve the mystery. Their romance pulls Lizzy down a dangerous path to memories of her turbulent high school years and her mother’s drug use. Once her mother shows up, she warily accepts her help to solve the crimes.

This book spins a tense mystery tied up in a romance bow with a dash of magical realism thrown in for good measure. I liked Lizzy from the start and rooted for her to make the right choices concerning the farm and love. “The Last of the Moon Girls” will leave you with a good feeling after a suspenseful ride. 4.5 Stars!