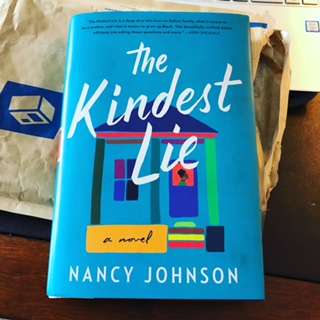 Ruth, it’s a perfect name from the Bible for this real woman. A name given to her by her grandmother when she was born. A name her Mama (grandmother) hoped would allow her granddaughter to get her foot in a lot of doors. As we get to know our Ruth, we find out that she has a secret. A big secret. This smart, funny woman has a secret that she’s held onto almost her whole life. She hasn’t told her any of her friends, and definitely not her husband. This secret is pressing down on her hard and she’s not sure what to do.

You see our Ruth had a baby when she was in high school. A baby that she and her family tried to hide from the world and never told the boy responsible. A baby that she handed over to her Grandmother minutes after the birth to give up for adoption. Ruth wanted to go to Yale. Something not too many people in poor Indiana get a chance to do. Something no one in her family has ever done. Her grandparents, who raised her and her brother, sacrificed everything so she could have that dream.

But the pressure of her decision to give up her child weighs heavy on her and she finally confesses what happened to her husband right before Christmas of 2008, right after the election of Barack Obama. Right when the world felt like a hopeful place to so many people. So, with her husband not speaking to her, Ruth decides to go home to Ganton, Indiana and visit her family for the first time in a long time. She wants to find out what happened to her son, but her grandmother has other ideas. She thinks she knows what’s best for Ruth. The truth needs to stay buried.

Enter Midnight, a lonely 11-year-old boy back in Ganton who is the grandchild of one of her Mama’s best friends. His mother died when his little sister was born and his father is lost to his own demons. After they meet, Ruth is drawn to this white child that wants to be good, but continually runs toward trouble. You see, Midnight’s had a rough start in life. Following a decision to help his best friend in a fight against the bullies attacking him, Patrick, or Midnight as his friends call him, gets hurt. His arm is set on fire by those same bullies and it’s damaged for life. Wanting to help him find his way, Ruth sees some of herself in this young white boy who is lost and without a mother. Then something big happens, we can see it coming, but we can’t stop it.

This story gives us all a good view into the racial norms and tensions of then and now. The small fictional town of Ganton could be anywhere in our country. And Ruth gives us a look at what it means to be a mother. Maybe not the kind in a sitcom, but as Nancy Johnson writes in the last paragraph, “Perfect mothers didn’t exist, only perfectly flawed ones did.”  And she gave us a look into the life in small towns across our country that are still struggling with no jobs, downtowns closing up, and hard times. Their citizens, their hopes, their dreams. This book for me was more a true-to-life look at the racial undertones that color everything, even if we don’t always see them. The mothers that are out there fighting for their children to have a better life, like my parents. And the children who are looking for a mother, a friend, someone to champion them. A huge 4.5 Stars!! This amazing heartfelt story from Nancy Johnson will shake your roots and your heart. Don’t miss the opportunity to feel it.