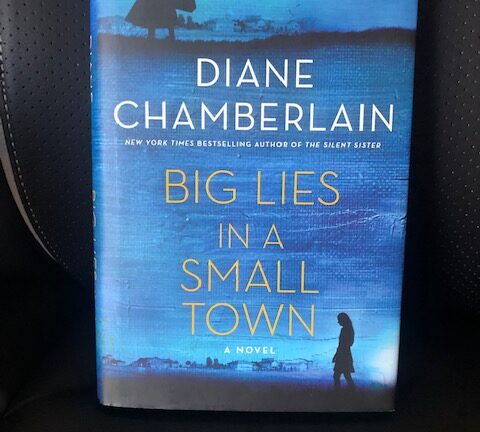 I’ve been trying to get to this book for a long time. I love to read Diane Chamberlain’s books. I love how she weaves her stories with details that reveal what’s coming, how she gives you the woman’s point of view, and how she solves her mysteries by the end of the book. I want an ending that satisfies the build-up and boy, does she know how to build a story.

Anna Dale, a young artist, was chosen to paint a Post Office mural in 1940 for Edenton, NC. Being from New Jersey, was an obstacle right away for her in this insular Southern town. She didn’t agree with all of the townspeople’s ways or norms concerning life and race, but she found her place and got started. Her painting skills weren’t the only things on her mind, as her mother had committed suicide months earlier and her own fear of having bi-polar disease were constantly on her mind. What happens next will keep you reading!

This dual timeline novel also follows a young girl who’s unexpectedly released from prison in 2018. She’s released into the custody of the family of a famous black artist – Jesse Jameson Williams who has bequeathed that a gallery be built in Edenton in a very short amount of time. In his will, he stipulates that this young art student, Morgan Christopher, must restore the post office mural to be hung in the gallery’s lobby by the opening. There’s just one problem, she knows nothing about restoration and has to do everything by herself. He also didn’t tell why he picked this young artist.

As the two timelines intertwine and advance, we learn about both of their histories and in the final chapters it’s revealed why Morgan was chosen for the job and as the last project of Jesse Williams, who helped many struggling artists during his lifetime. It kept me reading late into the night. I don’t want to give away the plot but this one will be worth the read. A huge 4.5 Stars!!