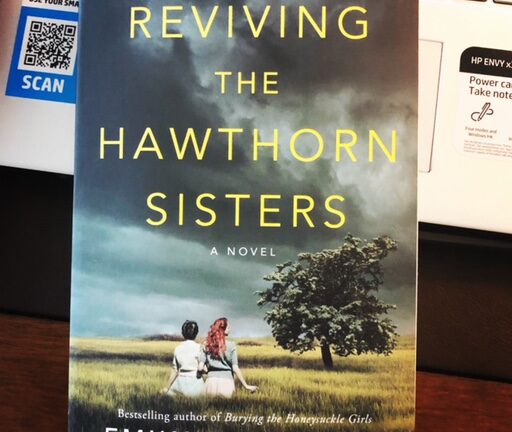 This book started off with me asking who grows up in an insane asylum? Dove Jarrod escaped from Pritchard Hospital in 1934 where she was born. After she dies, Eve goes back to film the donation that her grandmother left to revitalize the asylum. Eve is ready to move on with her life and stop propping up her mother and brother, but she needs to take care of this task first. She knows her grandmother, the well-known faith healer was a fake and she wants out of the web of lies that she has to pretend are true.

Lured outside before the event starts, Eve is attacked and threatened. Someone knows Dove’s truth and wants Eve to return a very valuable coin or face the consequences when he reveals the truth that will destroy her family. Working with the handsome filmmaker who’s shooting the documentary on Dove and one of Dove’s friends, she must unravel the mystery of the coin’s location before it’s too late.

This book travels back and forth between Eve’s desperate search in present day and what happens to Dove after her escape from the mental hospital in the 1930’s. As we fall into Dove’s story, we also follow Eve and her helpers as they try to find the missing coin for the mystery man before it’s too late. I loved the back and forth in the timelines, it keeps the story flowing well and the tension high. This book was fascinating as I entered the world of tent preachers turned faith healers. It kept me on the edge of my seat as the group of interesting characters from both timelines interact.

I would highly recommend this book for anyone looking for a good story. Set in Tuscaloosa, it keeps your attention with Eve and Dove’s stories as they intertwine to the exciting end. A well-deserved 4.5 Stars! What good books have you read lately?